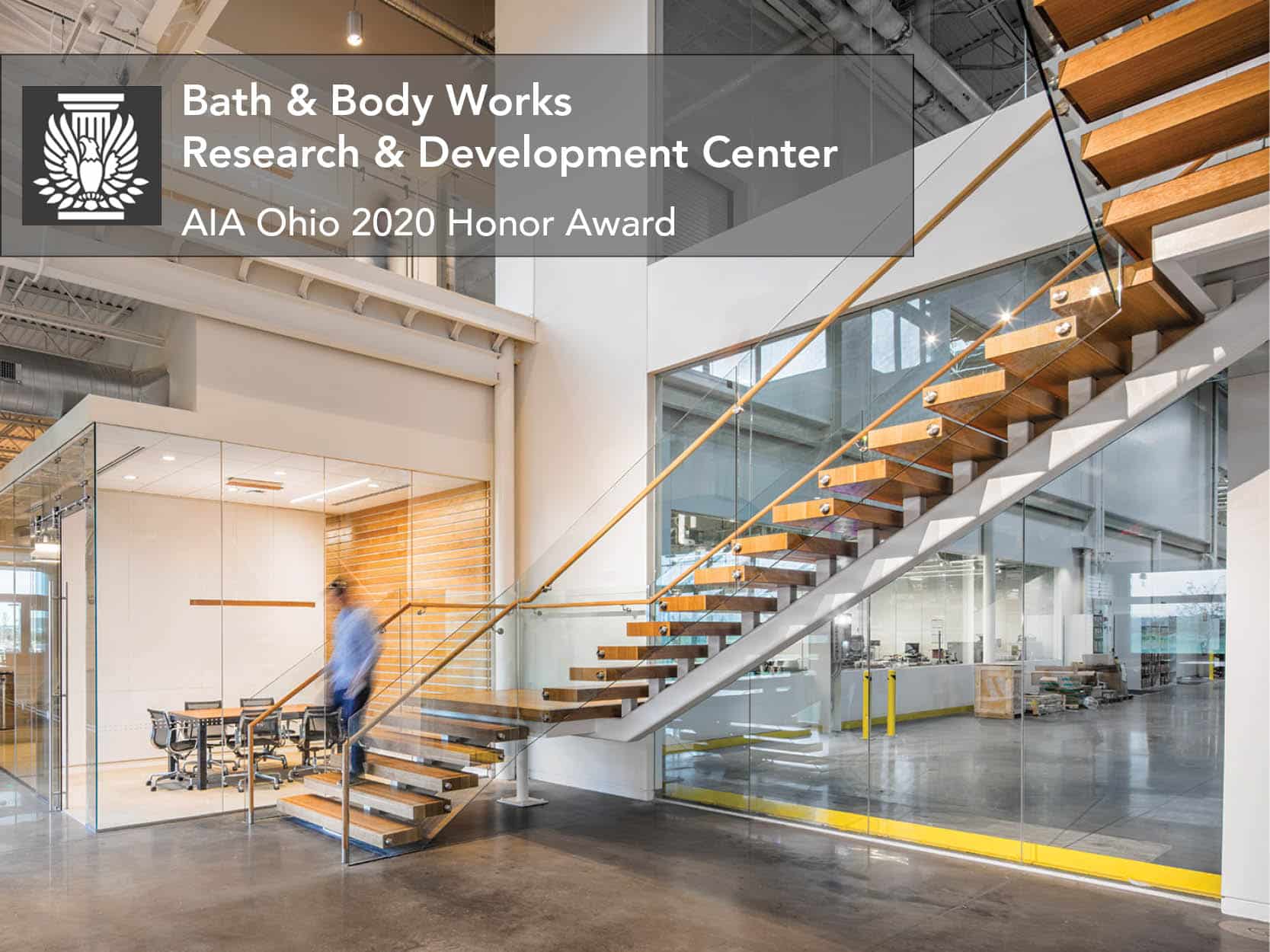 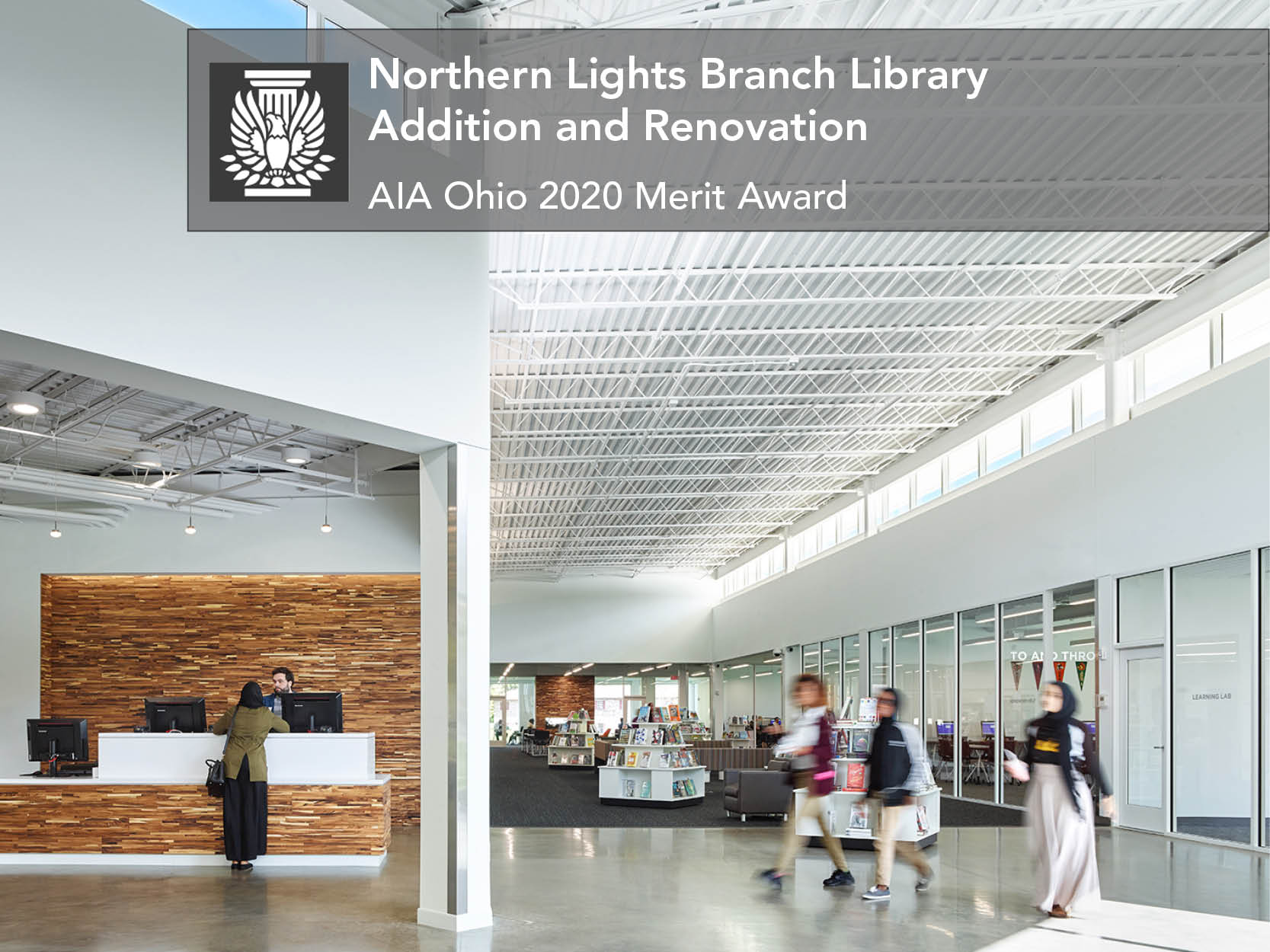 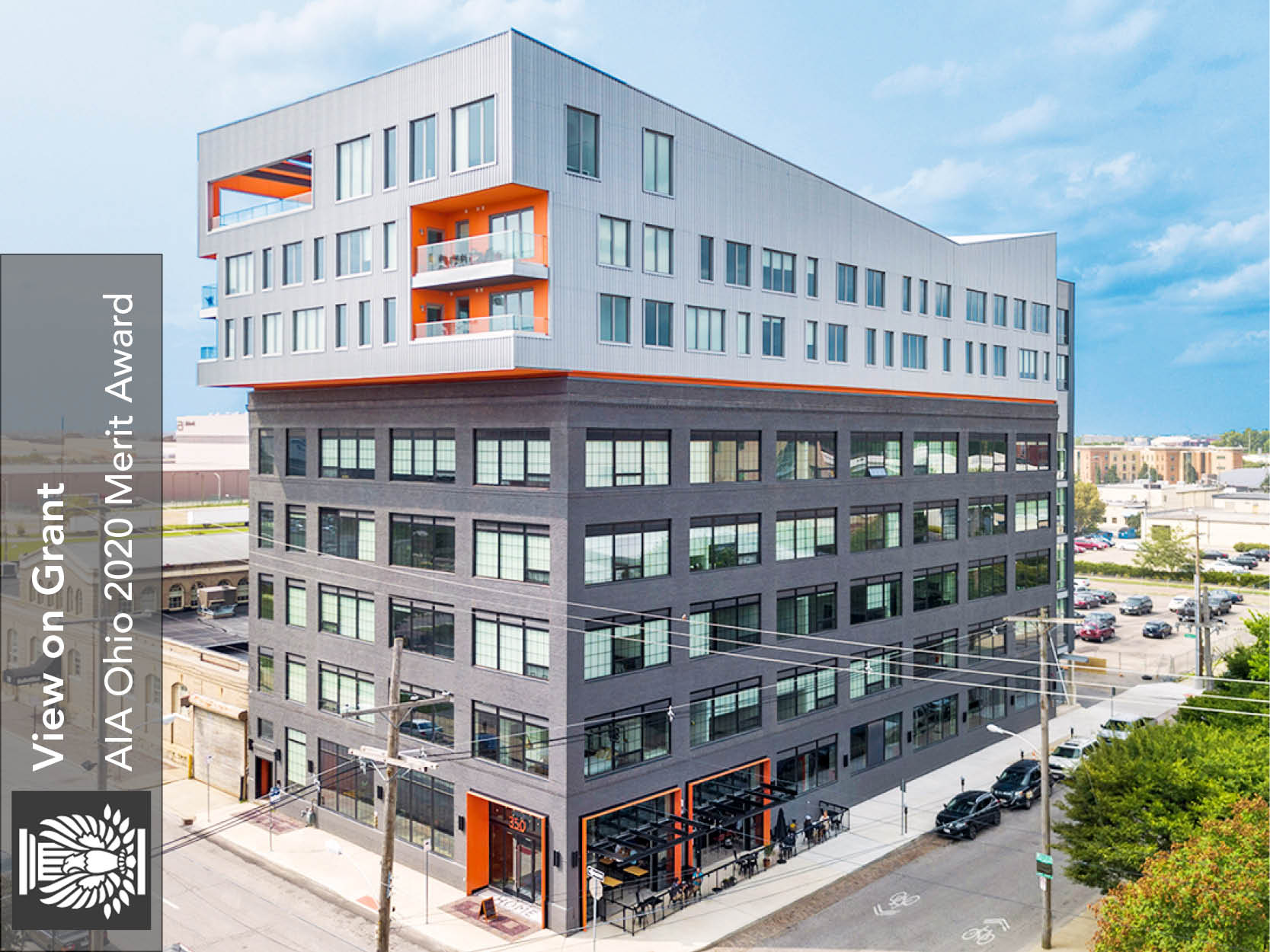 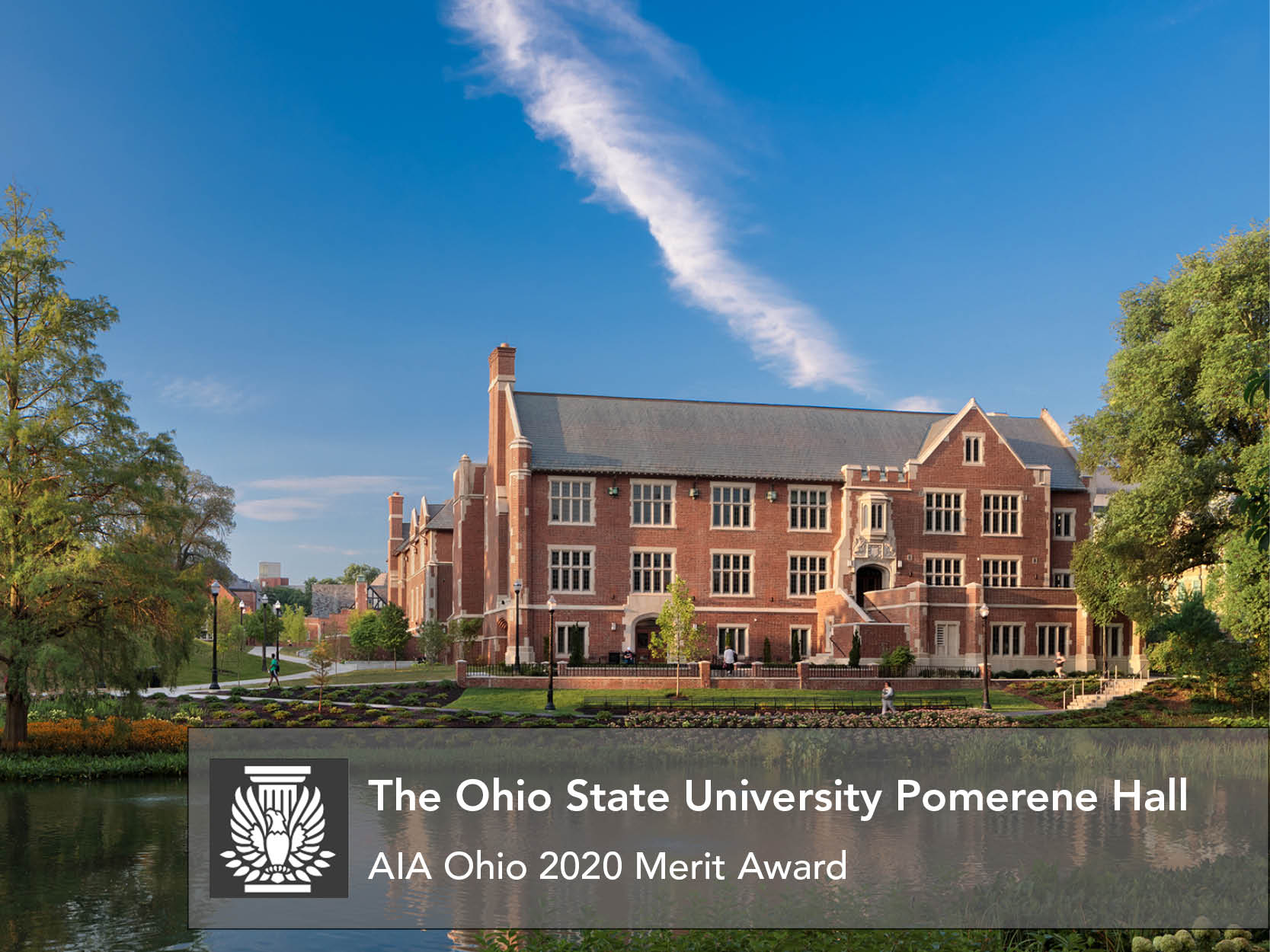 At the AIA 2020 Design Awards Program, 16 projects were highlighted and received Honor, Merit, or Citations Awards. SMBH worked on four of the award winning projects - one Honor Award and three Merit Awards.

The Honor Award: Bath & Body Works Research and Development Center
A fun fact about this distribution center and office is we designed the original building about 25 years ago. The AIA award-winning project was the renovation of an existing mezzanine and the addition of an impressive staircase, which we also designed. Our recently retired founder, Bill Lantz, managed this project in addition to serving as the project engineer.

The Merit Award: Northern Lights Branch Addition & Renovation
SMBH designed the original building, as well as this addition and renovation - part of a $100 million Columbus Metropolitan Libraries program to renovate and add to the library systems in Columbus. Other projects that we worked on that were part of this program include the Main Library downtown renovation, a new branch in Whitehall, and a new branch in Hilliard. Principal Bob Baumann managed this project and worked directly with the architect, DesignGroup.

The Merit Award: View on Grant
This project was a vertical expansion that converted the existing building into apartments. Our Engineer Nathan Miller and BIM Specialist Ben Ervin worked on this project, and Principal Bob Baumann managed the project, working with the architect, Jonathan Barnes.

The Merit Award: Pomerene Hall at The Ohio State University
A significant renovation and addition to a The Ohio State University building that is over 100 years old. Acock Associates was the architect and, as usual with them, the results are stunning. The building was completely transformed and updated while maintaining its historic character. Engineer Nathan Miller and BIM Specialist Ben Ervin also worked on this project, while it was managed by Partner + Director Joe Noser.

The following link has information about all of the projects that received awards along with a lot of great pictures. Enjoy!
https://www.aiaohio.org/design-awards/ 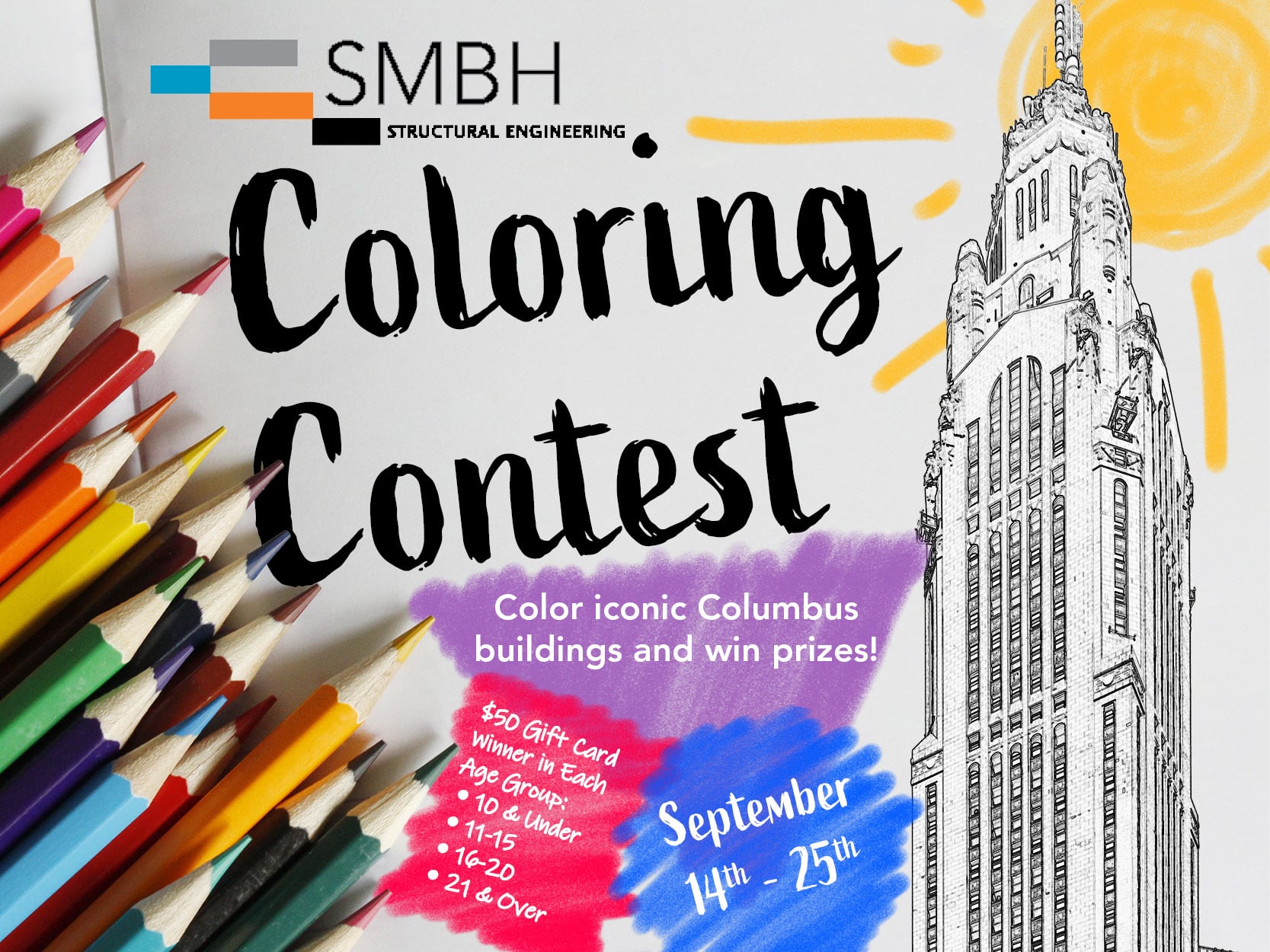 The world is a crazy place right now. The pressures and stresses of life amid a pandemic and social turmoil are uniquely intense because of how they seem to compound one another. It's a lot to process, and we all (kids and adults) need ways to decompress sometimes.

To that end, and in celebration of National Coloring Day, we've created a coloring book of some of our favorite and most iconic Columbus projects for you to go wild with. Kids schooling at home and need an indoor activity? Here you go. Working from home alone, lost all sense of time, and need a little time away from a screen? We got you. Have you always wanted to see the LeVeque tower in bright teal? Now's your time to shine.

We know it can be hard to take a break for yourself, especially doing something as "unproductive" as coloring, but it's a great way to relax and center ones self.

To help encourage some stress relief through creativity, we'll be awarding a $50 gift card to the winner of each of these age categories:

Winners will be announced on our website and social media on September 28th!

You may be seeing new names and faces with SMBH. It is with great pleasure that we introduce to you our newest team members! While we wish that we had all been in the office their first few months, they've been great additions to all of our teams, zoom meetings, and virtual happy hours.

Michelle Constantine, PE - Project Engineer: Originally from Chicago and alumni of Rensselaer Polytechnic Institute, Michelle has started work with our buildings team and brings seven years of engineering experience to the table.

Matthew Kozumplik - Design Engineer: Matthew is a recent graduate of The Ohio State University and is currently working on his Master of Science in Engineering. He has been a great addition to our team.

Dominic Mirizzi - Project Engineer: A graduate of Texas Tech, Dominic joins our industrial team after working as a project engineer in Dayton for three years.

Dillon Strahler - Project Engineer: Dillion came onboard our industrial team with two years of experience. He's a graduate of Ohio University and grew up in Marietta, Ohio. 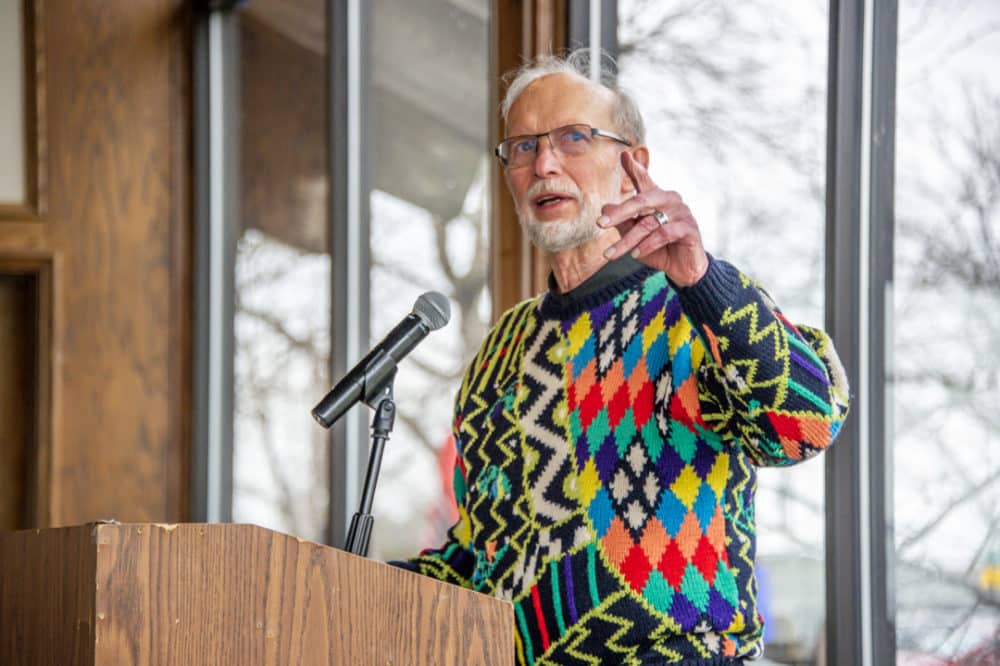 After 48 years with the engineering firm he founded, Bill Lantz has retired. Originally named Lantz and Jones, the firm has grown and evolved over the years, having offices in several states, then reconsolidating in one office in Columbus, has had multiple owner and name changes, and yet still possesses the culture and dedication to quality that Bill instilled in the company and in all of us. The legacy that he is leaving us with is nothing short of astounding.

When asked about the impact that Bill has had on him and SMBH, current Principal Bob Baumann said, “Bill set an example for us to follow.  He did that with his integrity, his competence and technical skills, his creativity and imagination and his ability to mentor and led us to be successful.” This sentiment is heard again and again from our employees. Like in Senior Project Engineer Anna Milligan’s remarks,

“I appreciate this man and his impact on my life, career, and overall perspective in such a monumental way.  I came here 16 years ago because a former colleague of his, with whom I was interviewing, couldn’t stop talking about what an incredible engineer, man and teacher he was.  Little did she know that I had interviewed with them the week prior and had an offer in hand from Lantz Jones Nebraska already.  Her glowing comments about Bill made my decision easy.  I have never looked back.  Bill (and the rest of the principals) delivered.  I learned so much from him in these last 16 years, far beyond the technical expertise and tutelage that he’s patiently provided time and time again.” 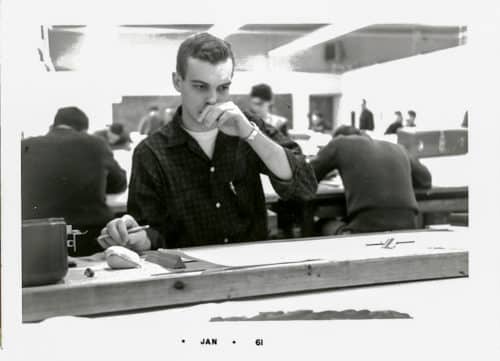 Bill’s knowledge and expertise began with his undergraduate degree in architecture from The Ohio State University. With this background and a Masters in Structural Engineering, Bill wasn’t what most people would consider an “engineer’s engineer.” As current Principal and President Stephen Metz explained, Bill’s background and insights into an architect’s needs and pain points led him to create a company culture where projects are approached holistically – a strategy that was part of the firm’s early success and is still a defining characteristic of it today.

Bill is known for coming up with creative and simple solutions that don’t always appear right away. “I learned how to think outside the box which isn’t always easy for the engineer-minded individual.  I learned how those complex problems that get you bogged down and searching for a complex solution often have the simple solution just staring you in the face if you take a step backwards and look at the big picture,” said Anna Milligan. Bob noted, “Bill would always lead you back to the fundamentals.  When you had questions, he would guide you to the answer by asking questions.  Most things led back to the engineering mechanics and free-body diagrams.  Once you understood how the structure was acting, then the solutions just dropped out.” 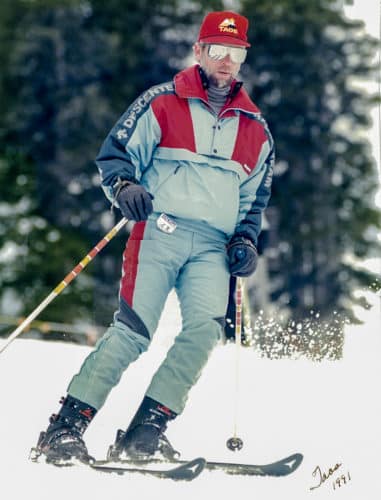 Beyond influencing many of us professionally, Bill has been a role model in other ways. Partner and Director of Marketing and Business Development Lisa Connelly notes that “Bill has taught me to be patient, mindful, and to enjoy life without actually saying any of those things.” With us for 12 years, Senior Project Engineer Kara Hendren said, “He instilled in me a desire to travel and make the most out of life. He taught me how to take pride in my work, but to not let it define me.” Our Director of Technology Jerry Marselle noted that the best things about Bill are his laugh and sense of humor. Bill isn’t a buttoned-up engineer, but is relaxed and makes you feel at ease. Anna Milligan adds that he has a very calming demeanor, and “it’s hard to feel stressed when you’re working with him.”

Current Principal Jon Beier said, “Bill has been a great example and has made this company what it is.” Bob Baumann concurred, adding that “As Bill was winding down his career, he gave us an example of how to guide us while giving up control.  He helped us to take on more responsibilities in a time frame that allowed for a smooth transition into the next generation of company ownership.”

Given the impact that Bill Lantz has had on us as a company and as individuals, there is no doubt that he is sincerely missed in the office. But the foundation and legacy he’s built here will go on in his stead, as a testimony to his success as an engineer, mentor, teacher, business owner, and friend. Thank you, Bill – for everything.

Photos: Bill Lantz speaks at his retirement luncheon in 2020, Bill Lantz working in 1961, and Bill Lantz skiing in 1991.

In honor of Bill's career and commitment to their mission, we have worked with Columbus Landmarks to establish the new Legacy Circle - with a $10,000 donation. The program strengthens the impact of their non-profit organization as they advocate for historic preservation and design excellence throughout Greater Columbus, and provide them with needed operating support. If you'd like to donate in honor of Bill, click here.